Video from the National Cathedral screening (in Urdu)

We were interviewed for “The Riz Khan Show” on Al Jazeera last week. We had a blast at the interview and visiting with Riz and his production team. The show is airing today and is already up on YouTube.

It was a lot of fun and a little intimidating being interviewed for such a huge show. Riz Khan is a star and Al Jazeera English is accessible in 120 million households worldwide from Africa to Europe to China. It’s unfortunately only on the internet in the US.  Al Jazeera is available in China but not in the two largest democracies in the world, the US and India. Go figure.

Frankie, Craig and I spoke to a religious leader of a small group of committed followers in Texas who really got me thinking. I won’t reveal his name or sect right now but wanted to share some of the things he said.

We met the bearded man in his traditional clothes inside his small and non-descript place of worship. Most people in the area would not even know it was there. The group, though a registered faith based group, refuses to take government money for their small school of 16 students. “God,” he said, “takes better care of us than Uncle Sam.” They don’t vote as policy and will not participate in any politics. He didn’t seem to be attached to America at all as a country or as an idea.

He was not happy with the relativism of American culture. “Everyone says this is your opinion, this is my opinion—each person chooses. But what about right and wrong?”

“Justice will come”, he said. “Sodom and Gomorrah didn’t survive and I don’t believe America will either”.

He said that they appreciate the freedom in this country—they obey our laws, pay taxes, pray for others. But if they were told to do something that violates the Holy Book, they would not do it. He said they were not anti-government but that, “we feel like we are an ambassador here, just temporary. Our citizenship is in heaven”.

END_OF_DOCUMENT_TOKEN_TO_BE_REPLACED

We took Ambassador Ahmed down to Bourbon Street for  a glance at the festivities during Mardi Gras. It was interesting to see his response. I had been to New Orleans for Mardi Gras before, as an observer/participant (more of an observer) so I knew what to expect but some of the others were kind of shocked. It is a lot to handle, seeing it for the first time.

We had fun just watching people and seeing the diversity on the street. Ambassador Ahmed didn’t know what the celebration was so we had to try to explain it to him, and it’s difficult. The flashing, beads, binge drinking until people pass out slumped against walls–how do you explain this to an outsider? We tried, as you’ll see in the video.

Later, we went to The Spotted Cat, a nice Jazz club a short ride away from Bourbon Street and met Kid Merve who was celebrating his birthday in style. We watched some Jazz and spent the rest of the evening with the local crowd, getting a different taste of New Orleans. See the video for some good Jazz and and a different take on Bourbon Street.

Calling on the President in the ‘White House’

That’s the President of  American University, Dr. Cornelius Kerwin, in the ‘white house’ on campus, of course. We had the honor of visiting him in his office this week to meet with him and brief him on the status of the project and interview him as well.

He was very eloquent and spoke very highly of the project.  He congratulated us and called “Journey into America “likely to be one of the most definitive works to date on the Muslim experience in the United States”. High praise, for the project and for Ambassador Ahmed.

We were really happy to have that vote of confidence from the Big Man on Campus. Please see the video below for more.

Thank you all for all of the responses to the CNN article. We’ve had a lot of really  positive comments and some constructive ones.

The post about Arab, Alabama has received a lot of attention. It’s now our most popular post. Even the Arab Tribune wrote about out visit.  I’m from Huntsville, just up the road and was excited about bringing the team to Alabama. We chose Arab because of the name, really. And yes, we knew the story about the name beforehand. We just wanted to have a little fun with it and see what it would be like to put Hailey in an abaya (traditional Arab dress) in a town with the same name–no offense meant to the good people of Arab. Take a look at our earlier post about stereotypes. We know that the sterotypes are not necessarily true. I, for one, expected the kind of generous and warm reponse that we got all over the south, not just in Alabama. Please see “Journey into Islam“, our previous project, to see how we were treated in the Muslim world as obvious non-Muslim westerners–similar to the hospitality we received in Arab.

I was really proud of the way that Hailey was treated in Arab. I keep telling the team that relations between different races and religions are sometimes better in the south than other places. Hailey got much worse looks in Miami, for example.

In Alabama with our friends at the Gadsden Islamic Center

We also made a stop in the small town of Gadsden, Alabama and had lunch with some wonderful new friends. They live very peacefully with the non-Muslim majority and have not had many problems at all and all of the women we met wore the hijab.

So thanks again for all the comments. More posts are on the way.

We had a great stop in Nashville visiting Vanderbilt a couple of times, several Mosques, caught some bluegrass music at the historic Station Inn and we got a chance to meet up with several members of the Kurdish community, both at the restaurant in the video below and at the Salahuddin Islamic Center. Salahuddin, of course, is a hero of the Kurds. A Kurdish Muslim, he was the Sultan of Egypt and Syria and led the resistance against the crusades, even conquering Jerusalem. He led with such honor and decency, even to his enemies, he is a hero throughout the Muslim world.

The Kurds have their own language and culture, and hail mostly from Turkey, Iraq, Iran, Armenia and Syria, in an area generally known as Kurdistan. The first Kurds came to US after WWI, then in several waves since. Some Kurds came to the US after a failed revolution in Iraq, some went to Iran. Many more came after the Kurds supported Iran in the Iran-Iraq war, and Saddam Hussein retaliated, attacking villages with chemical weapons and some more after Hussein invaded Kuwait. Now, the largest Kurdish community in the United States is in Nashville.

END_OF_DOCUMENT_TOKEN_TO_BE_REPLACED

Posted on February 2, 2009 by jonathanhayden | 12 comments
When we were planning our southern leg of the journey, my brother Josh, who lives in Nashville, told me about a small Muslim community in Columbia Tennessee whose mosque was attacked. Frankie, Craig and I immediate decided that we should visit.
We met Daoud Abudiab, Director of the Islamic Center of Columbia, when we arrived in Nashville at the Nashville Islamic center. He invited us down to Columbia to tell us the story of the attack and have lunch with some of the community.

On February 9, at 5:00 a.m., Daoud was awakened by the fire department. His Mosque and the home of the Muslim community was ablaze.

The community of 55 people at the maximum had purchased the building paid it off and was extremely proud that they had a home in the idyllic small town of Columbia in south Tennessee. The mosque was the only one within a wide radius and people from many small towns in the area came to worship there.

Three individuals had broken in, trashed the inside and tossed Molotov cocktails into the Mosque. They had spray painted several swastika and “white power, we run the world”. They were part of something called the Christian Identity Movement. Fortunately, they were arrested immediately and are awaiting sentencing. END_OF_DOCUMENT_TOKEN_TO_BE_REPLACED

We’ve been traveling through Florida for the past week–from Sanibel Island where Ambassador Ahmed spoke to a crowd of 400 people, to Fort Myers to Palm Beach where Ambassador ahmed spoke again to The World Affairs Council, finally all the way down to Miami. We leave tomorrow early for Georgia.

In Ft. Myers we met Iman al Darsani who you will see in the video below and in Palm Beach we spent some time with Reverend Bob Norris, also in the video, from the Royal Poincianna Chapel.

END_OF_DOCUMENT_TOKEN_TO_BE_REPLACED

Roundup of the first three trips 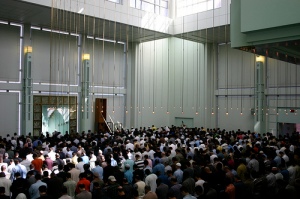 At the largest Mosque In New York

But, everyday brings a new highlight. From some of the interviews that we have posted here, to some that we have saved or will post later, we are kept inspired by the people we’ve met along the way. We all have different favorites like Hamza Yusef, Sirraj Wahhaj, Dawud Walid in Dearborn, Imam Feitullah, Noam Chomsky, Judea Pearl, Sherriff Lee Baca. The list could go on and on.

END_OF_DOCUMENT_TOKEN_TO_BE_REPLACED

Journey Into America
Blog at WordPress.com.